How to Qualify for the KBF National Semi-Finals

FRANKFORT, Ky. (Oct. 7, 2016) — Now that water temperatures are settling downward for the fall, the Kentucky Department of Fish and Wildlife Resources is resuming its trophy bass propagation program. 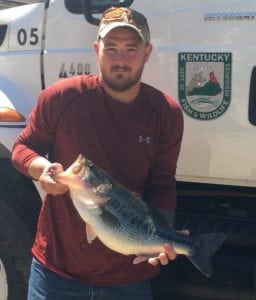 The program only accepts trophy-sized largemouth bass from anglers. In return, anglers receive a free replica mount of the fish. Bass accepted for the program are used as broodstock to grow a new generation of large fish.

“By pairing male and female largemouth bass that have already shown the ability to grow to larger-than-average size, we hope to produce offspring with the same genetic growth potential,” said Jeff Ross, assistant director of fisheries at Kentucky Fish and Wildlife. “Stocking these offspring across the state could provide anglers a better chance at catching a memorable fish or even a new state record.”

The program launched in spring 2016. Department officials shut down the program for the summer because higher temperatures are stressful for fish being transported to hatcheries.

Anglers donated four trophy bass in the spring. Unfortunately, only one was caught early enough for the hatchery spawn it. Offspring from that fish will be stocked in Fishpond and Greenbo lakes, where the adult trophy fish were caught. Trophy bass offspring will eventually be stocked at lakes across the state.

For more information about how to donate fish to the program, visit the Kentucky Fish and Wildlife website at fw.ky.gov and search under the keywords, “trophy bass.”

Permanent link to this article: https://kybassfed.com/kyfw-brood-stock-program/