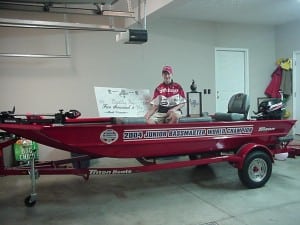 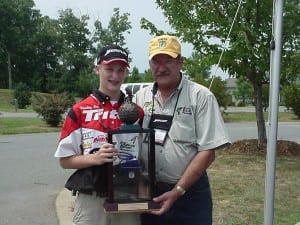 CHARLOTTE, N.C. – Sean Alarid and Bradley Roy released their bass back into Lake Norman Monday, but ended up with something that lasts forever. The two young anglers became the first Junior Bassmaster World Champions.
Alarid, 15, of Oakley, Calif., bested 35 anglers in the 15-17 age division with a single-day catch of 6 pounds, 3 ounces, while Roy, 13, of Lancaster, Ky., brought in 3 pounds, 15 ounces to win the 11-14 age division.
Both boys didn’t just look like professional anglers in their colorful, pressed tournament jerseys; they acted and sounded like the heroes of the sport with whom they spent Sunday and Monday.
“It’s different from the (California) Delta,” said Alarid, who has been fishing tournaments on Sacramento’s sprawling, bass-laden fishery with his father, Steve, since he was 6 or 7 years old. “Here, you have to work. At the Delta, you just have to pitch back in pockets.”
Alarid caught two bass – one a 3-15 bruiser that earned his age division’s $1,000 Big Bass of the Tournament prize – drop-shotting a RoboWorm into brush after he noticed its success during Sunday’s practice round. The other Purolator Big Bass Award went to Ben Cayer of Bethel, Vt., who brought in a 3-4 lunker that was the largest fish in the 11-14 division.
Young anglers qualify for the world championship through a rigorous series of tournaments at the local and state or province level. The 66 qualifiers are winnowed from the anglers in 141 Junior BASS Clubs in the United States and Canada. For Roy and Alarid, the big field made victory even sweeter.
“It’s very exciting to me,” said Roy, who won’t be eligible to fish adult BASS events for three years but has managed to attract seven sponsors. “It’s kind of unbelievable. It hasn’t sunk in yet.”
Roy got a taste of success during Sunday’s practice when he and his boat mates finished third in a bragging rights tournament. Roy’s teammates included Curtis Hoat of Forest, Ohio, and professional angler Chad Brauer of Camdenton, Mo., who is competing in next weekend’s Bassmaster Classic.
In fact, Roy is used to success. In addition to the tournaments that he won on his march to the Junior Bassmaster World Championship, he has competed in local tournaments with his father since age 7. Although he’s hung around with anglers all his life, he admitted the quality of competition in Charlotte was a surprise.
“It’s was a little different because they’re all at the same level I am,” he said. “It’s a lot more competitive.”
Although both boys said that time with other young anglers was a major highlight of the event, they each lit up when talking about getting to meet and spend days fishing with the pros they have watched on ESPN2.
“I just look up to these people,” Alarid said. “All these guys qualified for the Classic and that’s what I want to do.”
He said Mike McClelland, who fished with Alarid on Sunday and served as non-fishing “boat captain” on Monday, gave him some useful tips on Sunday, including which bait colors work best under the overcast North Carolina skies.
“Sean didn’t need a lot of direction,” McClelland said. “He’s an unbelievable fisherman.”
McClelland wore an ear-to-ear grin as Alarid accepted an oversized check for a $5,000 scholarship.
“It’s very encouraging to see that someone has stepped in to do something to get kids involved,” he said. “It got me started thinking back about my childhood. Kids today are so much more educated about fishing than I was at their age. Back then, the pros didn’t want to give up their secrets, they didn’t always tell you what they were doing. It’s neat that we’re finally educating the next generation of anglers.”
Roy and Alarid each won a $5,000 scholarship. Roy plans to put his to use toward a degree in “architecture, or maybe marine biology.”
“I don’t know what I’m going to do (in school),” Alarid said, adding out that his major career plan is to become a pro angler. “But I’m going to go to college.”
Other competitors also earned scholarship money. In the 11-14 age group, Ben Cayer of Bethel, Vt. won a $2,000 scholarship; Kyle Heels of Barrie, Ontario, Canada earned $1,500 for third; J.C. Christopher II won $1,000 for fourth; and Derek Kuntz of Inver Grove Heights, Minn., earned $500 for fifth.
Due to a scoring error that was later corrected, six anglers in the 15-17 age division earned scholarships. Jeremy Lins of Madison, Wis., whose catch was corrected from 3-9 to 5-14, earned $2,000 for second place. While the next four anglers all caught the same weight – 3 pounds, 11 ounces – BASS rules break ties first by number of fish caught, then by biggest bass caught. As a result, Mike Roselle of La Plata, Md., whose big bass was 2-3, earned $2,000, donated by Mercury after judges initially announced that he finished in second and then corrected the error in Lins’ score. Blake Stewart of Derby, Kansas, earned a $1,500 scholarship after his big bass weighed in at 2-2; Robert Arasmith of Rome, Ga., earned $1,000 for his 1-15 big bass; and Jonathan Puhalski II of Winstead, Conn., earned $500 for his single, 3-11 bass.

Permanent link to this article: https://kybassfed.com/1st-ever-junior-world-championship/